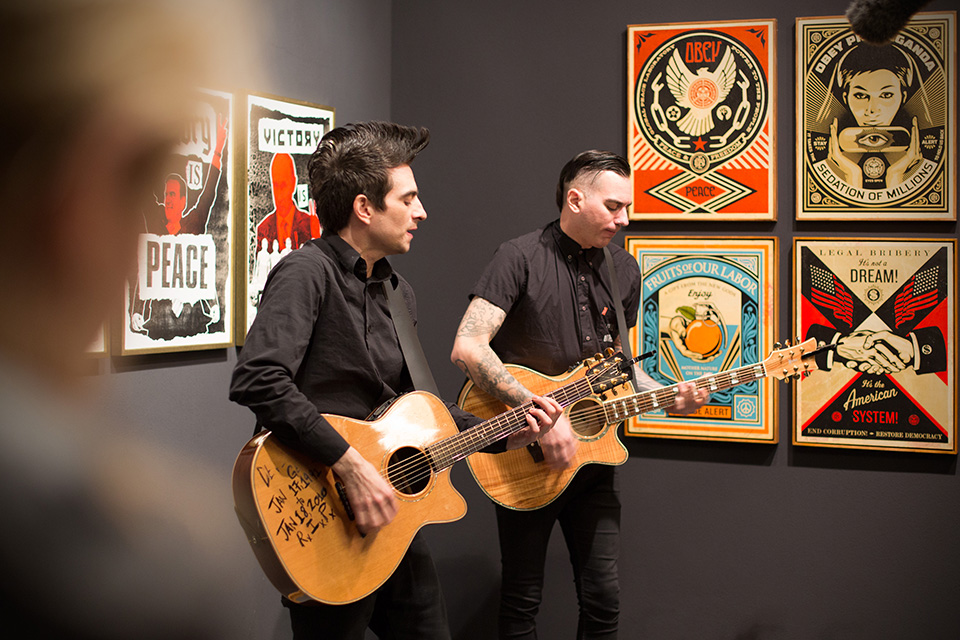 VICTORY IS PEACE 2016 / Opening with ANTI-FLAG

Whenever street art is mentioned nowadays, a lot of different disciplines are thrown into the same pot, often due to a lack of knowledge about the subject. Apolitical graffiti is also categorised under the “street-art” label, as well as commercial urban art. But the street-art movement is characterised by its socially critical and political concerns. Many of its protagonists have their roots in punk rock and draw their inspiration from protest movements like Occupy Wall Street and grass roots movements, as well as from works by authors like George Orwell, Noam Chomsky and Naomi Klein.

The pursuit of social justice and the uncompromising discussion on the causes of social grievances have for decades meanwhile also been the driving force for artists Shepard Fairey and NoNÅME. For them it’s about a whole lot more than garish colours and decorative illustrations!
We are delighted that we have been able to get Shepard Fairey, one of the most significant contemporary artists, and NoNÅME, whose work has up to now only ever been seen in public spaces in cities like London, Paris, Vienna, Berlin and Munich, on board for our exhibition VICTORY IS PEACE 2016. In their works on show at the exhibition these two street-art artists confront global topics like the decay of ethical and moral principles driven by greed and excess and the increasing infiltration of the democratic state as a result of lobbyism and corruption. Democracy is shown as a fragile commodity that is currently in a state of decay. This danger is not only threatening our freedom, but also the future of humanity on our planet. While lobbyists are negotiating the dismantling of constitutional democracy in secret backroom meetings, society at large seems to prefer to concentrate on the symptoms of an unbridled neoliberal economy, instead of questioning the actual causes of current developments like Pegida and the refugee crisis.
At the exhibition opening on 12th February there will also be a performance by the punk rock band Anti-Flag. With an acoustic concert in the Positive-Propaganda exhibition space the political punk legends from Pittsburgh, Pennsylvania will be underlining their alliance with the artists.
On 13th February from 7:00 pm a panel discussion will offer guests the opportunity to further deepen their insights and discuss them together. The artist talk on the topic of “Corporatism” between the artistic director of Positive-Propaganda e.V. Sebastian Pohl and Chris#2 and Justin Sane from Anti-Flag will be taking place at Café Jasmin in Munich’s Maxvorstadt district.
Exhibiton duration // 16th February – 1st April 2016
Opening times // Tuesday – Sunday, 3°°pm – 8°°pm | closed on Monday / Admission is free
Exhibition closing // Sunday, 3rd of April 2016, 2°°pm – 8°°pm
Exhibiton Space // POSITIVE-PROPAGANDA Artspace, Dachauer Strasse 149 (entrance via Loristrasse), 80335 Munich